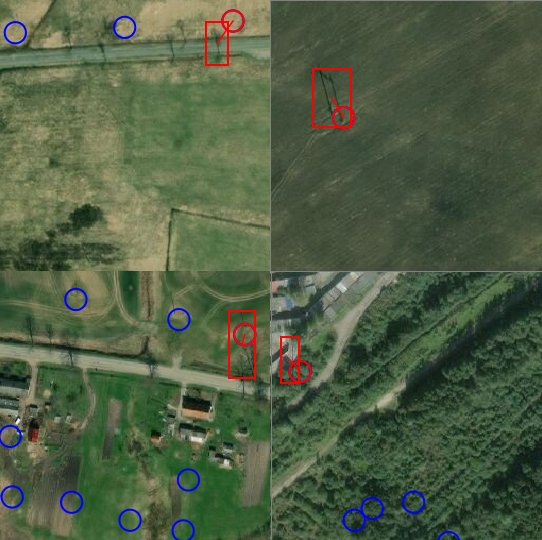 One of the primary goals of any state is to provide affordable, reliable, and sustainable electrical power supplies. A major obstacle to this is since electric power utilities do not always have a comprehensive map of overhead power lines, and the schemes that do exist are usually outdated and incomplete. Lack of the actual map makes it is difficult either to arrange the maintenance or the energy network development including alternative energy sources use. Thus, governments and organizations need a quick and cost-effective map empowered tool. The high-voltage grid is constantly expanding, so the ability to reach accurate remote sensing data at regular intervals is important. So GIZMOre/cGIS platform has "onboard" an algorithm capable of efficiently mapping overhead power line infrastructure.

This feature provides an automatic solution to the problem of power line detection based on the use of machine learning. The solution is an algorithm that receives remote sensing data as input. The resulting images are processed in the visible spectrum by a neural network and return geospatial locations that with a high degree of probability contain elements of high-voltage infrastructure - power line poles. This data further requires verification by the operator. However, even in their original form, they are classified as geographic positions that correspond with a high degree of probability to the locations of real objects in the areas.

The first question to create such a solution was to set the machine learning task itself. We were initially inspired by the way DevSeed solved a similar problem. Their solution involves the classification of vector tiles, on a map with a scale of 1:2000, which indicates whether there are power line poles on a given tile. Subsequently, the operator needs to manually trace power lines on the classified tiles, using a web interface with an interactive map.

This method of overhead power lines recognition has proved to be insufficiently effective. We decided to find a better solution to this problem, namely the direct detection of the power poles themselves on the map.

The input data for the training task are the geographic coordinates of power line poles categorized by the following meaningful attributes: pole type, product material, voltages, and others. A total of 211725 objects were represented in the full dataset. Further work was carried out with the data grouped by support type as the most representative feature. The following is a summary of the data by this criterion.

Due to the lack of distinguishability of objects of all designated types on the images, the following objects were selected for further work in the machine learning algorithm:

The data for machine learning was a raster image of 512x512 pixels with the areas of high-voltage power line towers marked on it. The markup was a rectangular area in the image, corresponding to an average area of 70x70 meters on the ground.

For machine learning, the original raster images were partitioned with 80% data for training and 20% data for testing.

For the task of detecting objects in an image where objects of the target class are only a small part of the image, it is a problem that the parts of the image where the target object is missing contribute too much to the training process, eventually leading to many gaps in the test set. To solve this problem, we used the Focal Loss neural network function, which reduces the influence of frequent backgrounds and increases the importance of infrequent objects in training.

Thus, the following neural network architecture for detection was chosen - RetinaNet, which just uses Focal Loss as the loss function.

During the RetinaNet training, the loss function is calculated for all considered orientations of candidate areas (anchors), from all levels of image scaling. In total, there are about 100 thousand areas for one image. The Focal Loss value is calculated as the sum of function values for all anchors, normalized by the number of anchors containing the sought objects. The normalization is done only by them and not by the total number, since the vast majority of anchors are easily defined backgrounds, with little contribution to the total loss function.

The so-called Feature Pyramid Network (FPN), which operates on top of one of the commonly used convolutional neural networks (e.g. ResNet-50), is used as the basis neural network. FPN has additional lateral outputs from hidden layers of the convolutional network, forming pyramid levels with different scales. Each level is supplemented with "knowledge from above", i.e. information from the higher levels, which are smaller in size but contain information about areas of the larger area. It looks like artificial enlargement (for example, by simple repetition of elements) of more "collapsed" feature map to the size of the current map, their element-by-element summation, and transfer both to lower levels of the pyramid and input of other subnets (i.e. to Classification Subnet and Box Regression Subnet). This allows extracting from the original image a pyramid of features at different scales, on which both large and small objects can be detected. FPN is used in many architectures, improving the detection of objects of different scales - RPN, DeepMask, Fast R-CNN, Mask R-CNN, and others.

Our network, like the original one, uses FPN with 5 levels numbered P3 through P7. The level Pl has a resolution 2l times smaller than the input image. All levels of the pyramid have the same number of channels C = 256 and the number of anchors.

The areas of the anchors were chosen as follows: [16 x 16] to [256 x 256] for each pyramid level from P3 to P7, respectively, with an offset step (strides) of [8 - 128] pixels. This size allows analyzing small objects and some surrounding areas. In our case, these are power line poles with their surrounding shadows.

Machine learning results were evaluated in the following ways: